Sights to see, Places to Visit in Jersey in the 1960s 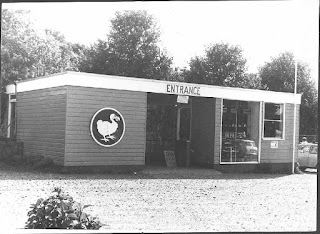 In 1966, under the "Four Square", publishers "New English Library" put out a small paperback called the "Four Square Holiday Guide to the Channel Islands". It was compiled by the late Peter Haining, and reflects a pre-decimal and bygone Channel Islands, just as tourism was ramping up to its giddy heights in the 1970s. Here's a brief extract.

Sights to see, Places to Visit 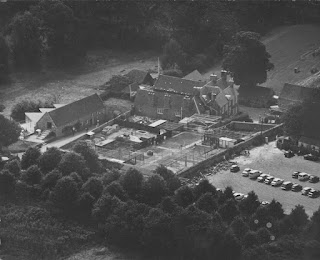 The Zoo, in its beautiful old-world setting at Les Augres Manor at Trinity, is worth taking an afternoon off from the beach to visit. Established by writer and TV personality, Gerald Durrell, it contains animals from all over the world including tropical birds, snakes, bears, monkeys, two very engaging lions, and a friendly Marsh Mongoose, "Makai" who took part in the film "Call Me Bwana" with Bob Hope.

Durrell's purpose in creating the Zoo was to start a breeding colony for animals threatened with extinction and it has now been open to the public since 1959. It is also the headquarters of the Jersey Wildlife Preservation Trust which has members all over the world. Younger visitors will recognize many of the animals from their television appearance with Gerald Durrell and they will also find plenty to fascinate them in the special "Pet's Corner". The Zoo is open from 10 a.m. to dusk seven days a week and there is a bus service direct from St. Helier.

St. Peter's Valley is undoubtedly one of the most beautiful areas of the island - particularly during the early summer when the lower parts are carpeted with yellow irises. When Queen Victoria visited Jersey and asked to be taken to the most beautiful area, this is where officials brought her; today, however, many tourists come to see the relics of the German Occupation which include a power station, three large ammunition tunnels going into the hillside (one is now used as a garage) and the Underground Hospital.

At the Beaumont Crossroads where most people enter the Valley is a cannon standing beneath an awning. This is one of the only six surviving cannons made in the 16th century by Owens of Houndsworth. The piece is 7 ft. long and fired shot weighing 21 lb. The inscription on the cannon tells its own story: “Jhon Owen Made This Pese Anno Dni 1551 For The Paryshe Of Saynt Peter In Jersse”.

St. Peter's Church is unusual for the fact that it was twice struck by lightning (1612 and 1843) - and on the second occasion the parish printed 275 special pound notes to pay for the repair of the damage! It can also claim to be the only church in the world which has a red light on the top of its spire to warn low flying aircraft!

Another church which was damaged by lightning - but in this instance THREE times - is Trinity Parish Church. In the building is a fine mural monument to Sir Edouard de Carteret, who was Usher of the Black Rod to Charles II.

Not far from the Church is one of those out of the way spots that may not be easy to find, but on discovery almost takes the viewer's breath away. The place is called, Egypt, but in no way does it resemble the Middle East country of the same name. In fact it is a community of little cottages scattered together in a small valley. The approach road winds down between the buildings and in most places is only just the width of a car. All around are gorse, broom, bracken and brambles growing in glorious confusion, presenting a contrast to the flatness of Trinity on one side and the majestic cliffs of Bouley Bay on the other.

During the Occupation Egypt was used by the Germans as a site for exercises and in doing this they destroyed what was surely the most unusual farmhouse in the world. For the occupier had built his own private ballroom adjoining the farmhouse! One can only guess what sort of an attraction that would have been today.

Jersey's Churches are all interesting in their own particular ways, but their histories are too long and complicated to be included in a guide of this nature. Let it suffice then to mention briefly a few of the more unusual ones.

At Leoville, for instance, there is an enormous Methodist Chapel which can hold close on 800 people. Behind it is the tiny granite chapel which was erected by the first converts to Methodism in the later part of the 18th century.

The Roman Catholic Church at St. Martin is also worth a call for here is buried Charles Edward Stuart, a descendant of the Young Pretender and said by his friends to have been the rightful King of England. 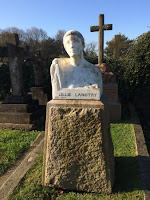 St. Saviour's Church, interesting as it is, has not the same attraction as the Rectory beside it. For it was here that the girl who grew up to be one of the world's great beauties, Lillie Langtry, was born in 1853. Lillie was the daughter of Dean Le Breton, the Rector, and old residents today will still recall their grandparents telling them about the "beautiful clergyman's daughter". Her career of being worshipped from afar by countless men began after her first ill-fated marriage to a wealthy Irishman. She visited London and was soon the subject of a poem by Oscar Wilde. Words were followed by paintings and in later years she was committed to canvas by no lesser artists than Millais, Leighton and Whistler.

Despite this adulation in England, Lillie was devoted to Jersey and when she married a second time the service took place at St. Saviour's Church. After her death her body was brought back to Jersey - by her own request - and she was buried in St. Saviour's Churchyard. Today an exquisitely executed bust which has captured the full light of her beauty looks down on her grave.

There is also a dramatic piece of history to be found in a somewhat neglected cemetery on St. John's Road. For here are buried several of the exiled Frenchmen who sought refuge on Jersey along with Victor Hugo. Their burial was performed with great ceremony - fellow exiles carrying the coffin through the streets preceded by a red flag. Before the graves were covered over, one of the mourners - often Hugo himself - would read a stirring ovation and denounce the tyranny of Louis Napoleon which had driven the deceased from his homeland.


No guide would be complete without a word about Jersey's abundance of ghosts. There's no guarantee given that the visitor will see one, but it is interesting listening to the locals talking about. spectres which have walked their lanes for centuries.

In St. Saviour's Parish they have actually named a road after a ghost - Rue de la Dame which runs into the Grands Vaux valley. The ghost is a lady dressed in white who is supposed to appear on certain nights of the year. There is another ghostly lady in white - allegedly - to be seen in the vicinity of an 11 ft. high stone at La Motte in St. Clement's. Because of this spectre the stone has been named La Dame Blanche.

Probably the most interesting ghost of all - again a lady in white (could all three be the same?) - has been reported in St. Lawrence. According to the legend whenever a peal of bells is heard in the lane which leads to Waterworks Valley a coach and six grey horses come galloping down the hill. In the coach sits a woman dressed in a bridal gown - but she has no face, only a grinning white skull. The reason for this, says the story, is that the woman drove to a church in St. Lawrence only to find that her groom had deserted her. Her reaction was to return home and commit suicide - so now she forever gallops the lanes looking for her faithless lover.

In the light of day these legends may seem laughable – but you try going to the locations in the depths of night! 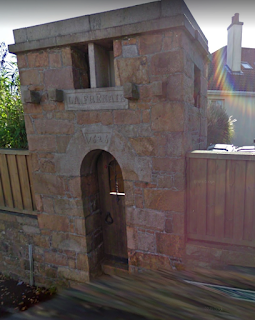 Finally, which is the most unusual sight of all on Jersey? The strange little miniature tower carved with the words "La Frenaie" which stands at the crossroads of La Chasse in St. Martin's Parish undoubtedly qualifies for the award. The building could be either the entrance to an old fort or perhaps the parish "lock up" - and this idea is strengthened by the fact that the date 1626 is carved over the entrance. The truth of the matter, however, is that the "tower" is a fake and was actually built in 1900!

The creator was an eccentric islander, Constable Messervy, who was a great traveller and delighted in devising phoney antiques. The old man's house – called "Les Alpes" - is just 100 yards up the main road from the turret, and today examples of his strange hobby are still visible. During the time he lived in the magnificent white house he created a fake mountain (since levelled), an Egyptian sphinx, an Indian Elephant, and a full size Swiss Chalet. The chalet can be seen from the road, as can a weird monumental pillar covered with distorted figures. At one time the whole garden was a mass of fakes - but today there are still enough of them left to demonstrate the old man's strange genius for fraud!
Posted by TonyTheProf at 03:00