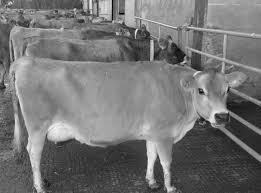 In local news...
Pay Rise for Milkmen and Grocery Workers

There was a pay rise for milkman and grocery workers and a shorter working week. For working on New Year's Day milk rounds man in Jersey will receive extra pay. This is included in one of the new agreements under which workers in several more trades in the Island have been granted a 5 shilling wage increase and improved working conditions.

The agreements negotiated between the Federation of Jersey employers and the Transport and General Workers Union are backdated to the 1st of January 1958.

In the dairy trade the increase for male adult workers will bring their rate to 7 pounds 16 shillings for a 48-hour week. New Year's Day, like other bank holidays already recognised, will be paid at time and a half.

The average working week is reduced from 48 to 46 hours - employers having the option of a 40 hour week during the summer months with a reduction to 44 hours for the remainder of the year.

The maximum rate for drivers in this trade will now be paid at the age of 21 and not at 24 as in the past.

Elderly Woman Knocked Over by Car

An elderly woman was slightly injured yesterday afternoon when it is stated she stepped from the pavement at the corner of Queen Street and Halkett Place into the path of a car by which she was knocked over.

The woman, Mrs M. Temple of Glenwood, Close du Clement, St Peter, suffered bruising to the lower part of her right leg and a sprained wrist. The car concerned was driven by a Mr B Buard of St. Saviour who, at Mrs Temple’s request, afterwards drove her to the JMT Terminus, Caledonia place, for her to return home by bus.

Inquest on for former Nigerian Official

The inquest on 87 year old Mr George Frederick Price, a retired treasurer of the Nigerian government, who fell in his bedroom at his home the Sheilling, St Aubin in the early hours of the morning of 25th January and who died at the general hospital last Monday evening was adjourned.

And in world news...

Britain in good heart. The Prime Minister Mr Harold Macmillan told Australian industrial leaders here today that sterling was strong and British industry in good heart. And he urged them to make conditions in Australia attractive for British Investments.

Sir Edmund Hillary stood by today at Scott Base McMurdo Sound to fly to Depot 700 where Dr Vivian Fuchs trans-Antarctic party were expected to arrive at around 12 on their way from the South Pole. Hillary will accompany Dr Fuchs’ party on the final 700 mile journey from Depot 700 to Scott Base.
Posted by TonyTheProf at 03:00