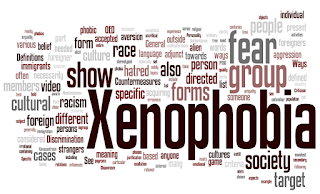 Saturday's Jersey Evening Post was full of the story of the rape of a young woman by 5 Farm workers. One of the features which has been picked up particularly on social media is the fact that these Farm workers has all come over from Romania and were all Romanian nationals.

It is not perhaps surprising but disappointing to see some commentators using this as an opportunity to fuel xenophobia. A good example is Mark Baker who wrote:

This is from the life improving “guru” who also writes that “Nothing is sadder than an amputated spirit.”

But isn’t his remark worthy of narrow minded amputated spirit?

One of the features of the defence case was that they had had no previous convictions in their own country. So quite how vetting could prevent such a horrific event happening when there were no indicators of previous criminal behaviour is unclear - but it does not stop Mr Baker from propagating his pernicious opinions.

It should be said that the majority of Romanians coming to Jersey are ordinary people like you and me. The trouble with news reports is that they always bring a focus on bad news and we hear very little about those people who go about their daily business in a law-abiding manner.

While there has not been a case of gang rape in the Channel Islands before – I’ve been looking back on cases of previous rapes and one murders after an attempted rapes, and it is clear that (rather as common sense suggests) that nationality is no predicator of such criminal behaviour.

In one case which ended in the murder of a nurse after an attempted rape, the perpetrator was a young Irishman from Belfast. By Mr Bakers curious logic there should be positive vetting of every member of Jerseys Irish population, because whenever they came to Jersey, there could be something sinister in their background!

But of course people coming from Ireland speak English as their native language where people coming from other European countries have English as a Second Language. This is the crux of the matter and where some of the xenophobia is deeply rooted. If it is not skin colour, it is language. It is what makes someone different.

The story of the tower of Babel is of course a miss but it demonstrates a very real truth that languages can cause barriers and ferment xenophobia. We should not surrender to this kind of tribalism which still exists in a secular form even though the tribal gods have been forgotten.

I was told by someone walking through town that they heard a number of people talking on their way to work in foreign languages that they did not understand, but why on earth should they speak English when talking to each other if it is not their first language?

Had a migrant come to Jersey over 300 years ago (before the Napoleonic wars), they would have found that the locals mostly spoke either Jerriais the local patois or French to each other. French was and is still one of the official languages of the states of Jersey. A ban on using Jerriais in schools in favour of English is one of the main reasons for the decline in Jerriais.

It would then have been the locals who would have complained about the migrants coming to Jersey who did not speak either Jersey French or French.