From 1979 comes this holiday guide - "This is Jersey". This is a flat brochure which is larger that the later glossy designs, and it doesn't have nearly as many pages - 16 double sided in all, including front and back covers.

It does provide a very interesting snapshot of the tourism scene in 1979, just as it was more or less at its peak, just before Bergerac launched, and before the package tour market and cheap holiday destinations abroad made Jersey's prices suddenly more expensive and the bottom fell out of the market.

Tourism is today rebuilding a new approach geared to the lifestyle of the modern tourist. It still has plenty to offer, but the old style of tourism probably won't sell today. But here's a chance to capture that flavour. 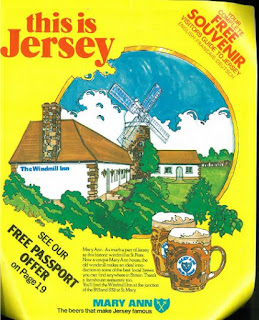 May I, as President of the Jersey Hotel Guest House Association welcome you to the Island of Jersey where hope you will spend one of the most enjoyable holidays of your life. We, in the Association endeavour to see, that our guests receive only the very best of service coupled with friendly hospitality. We trust this will be to your liking and we shall have the pleasure of welcoming you back on many future occasions.

Notice the brightly coloured brochure, and the advert for Mary Ann! Mary Ann is still brewed, by the Liberation Group at Longueville but back in the 1970s it was at Ann Street Brewery in St Helier.

I remember going to the Hotel de La Plage for New Years Eve in my late teens on several occasions with my parents and sister, the Miles family and their son Nigel - David Miles was chief accountant for the Seymour Group, and the Binnington family (Bernard and Betty and their children. Food and cabaret were the order of the evening, with often a very bad impressionist. It would end with the conga at Midnight through to the table laden with desert.

Another commentator who worked there around this time said:

"I worked there as a commis chef back in 1978 for the season it was a great place to work with all the chefs and staff , the kitchen was modern and good to work in plus you got good staff accommodation, I seemed to spend all my free time on the beach , shopping , or clubbing not a bad life for a young lad."

In the late 1980s, the Seymour group planned at extension to the Portelet Hotel

It is difficult to pinpoint exactly when the decline in tourism began, although a significant pointer would be the Seymour hotel groups plans for a large new hotel at Portelet in the 1980s. The was a large groundswell of local feeling that this would have a detrimental visual impact upon Portelet bay, but eventually planning permission was granted. By that time, however, the Seymour group had decided that the decline in the tourism market meant that the project was no longer viable, and decided not to go ahead with the building.

Of the five hotels which formed part of the Seymour Group, only the Pomme d'Or and the flagship Merton Hotel remain. The others have been turned into flats. La Plage is now converted to Residence de la Plage, effectively flats.The last of the others to go was the Portelet Hotel which was knocked down last year to make way for flats. 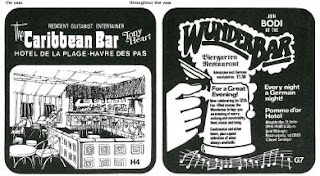 The Caribbean bar has long since gone, with the closure of the La Plage Hotel, and Bodi and his Wunderbar German nights no longer feature at the Pomme D'Or Hotel.

German nights' were a popular form of entertainment for both tourists and locals in Jersey the 1970's - and the Pomme D'Or in particular used to feature an 'oom-pa-pa' Bierkeller-style singalong evening, featuring a German singer/accordionist called Bodi

In the mid-1970s Mascot coaches were offering a variety of two-hour morning tours for 65p and 3¼-hour afternoon tours with a stop for tea at 75p. Three-hour evening coastal tours were 70p for adults and 35p for children and there were also nightly coaches to Crazy Nites and other cabaret entertainment, as well as day-trips to France in the Trois Leopards.