Conspiracies at the Hustings 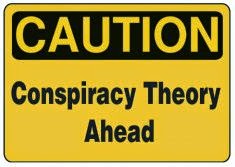 "I call it the “conspiracy theory of society.” It is the view that an explanation of a social phenomenon consists in the discovery of the men or groups who are interested in the occurrence of this phenomenon (sometimes it is a hidden interest which has first to be revealed), and who have planned and conspired to bring it about.” (Karl Popper, The Open Society and its Enemies)

The human aptitude to see patterns and order is a very remarkable one. It is clear that it has a great evolutionary advantage, in that it enables us to see repetitions as part of a whole, and greater pictures rather than fragments. And in turn, that same evolutionary advantage has led to the advance of science, because that is at the core of the scientific enterprise.

But it has led humanity down several dead ends and blind alley ways as well. The same impulse which propelled the advance of science in the 17th century saw the rise of the magicians, people who saw the ability to change the patterns, such as the elemental forces of weather, that govern our world.

Newton, for all his remarkable work in science, spent pages after pages in his notebook working out abstruse calculations from the book of Revelation for the return of the anti-Christ. The signs of wars, and plague, and bad weather were all around him. The pattern of the four horsemen of the apocalypse seemed to be coming true, and all that was needed was to break the code.

“Millions now living will never die” was, of course, the defining prophecy of the Jehovah’s Witnesses made in 1918 and which was a strong message until 1925, and even one I remember from the 1970s, when there could at least still have been a million or so from 1918 who were still alive. It has been largely dropped today, for obvious reasons. Again it is a prophecy founded on patterns, and making sense of patterns, and doing so wrongly.

And of course in recent times, probably the most successful version of conspiracy theory, ostensibly a work of fiction, but presented as based on fact, is the Da Vinci Code, snapped up and believed by a surprising number of people whose critical facilities have deserted them in place of the lure of conspiracy thinking.

In the recent elections, the same kind of thinking has been taking place, and nowhere is it better evidenced than in what Mike Dun has been saying in the Referendum No Campaign.

There are strange sentences which suggest the public are being brainwashed into thinking they should vote “Yes”:

“The public are not robots and should be enabled to elect ALL their representatives in a democratic – not automatic – way.”

And here is another piece of conspiracy bubbling to the surface:

The only difference between the Yes campaign and the No campaign is not that it is “all powerful” but simply that it is a small collection of individuals, not all of whom are in the States, who have come together, thrashed out issues, organised their campaign well to get the maximum effect.

Another example of conspiracy thinking can be seen at the election hustings. Mike Dun spotted Yes campaign stickers and exclaimed:

“Eleven of the eighteen Senatorial candidates are wearing Yes campaign badges at the hustings. Is this just another manifestation of the unspoken Party system at work or just an extraordinary coincidence...?”

Mike sees conspiracy behind everything, and thinks there is some hidden cabal, a secret order behind the scenes orchestrating matters so that the candidates are called in and told to wear the Yes stickers,

But the reality is much more mundane, and far more ordinary. James Rondel, one of the members of the Yes campaign, has been attending most of the Senatorial hustings. He has simply approached the candidates, and asked them “Are you voting Yes? Would you be happy to show your support by wearing one of these stickers?”

The only coincidence is that he has been present at all the Senatorial hustings to do that. For all the gripes over cost, stickers are really not that expensive, and it would be entirely within the realms of possibility for Mike Dun and his group to have done something of the same.

The fact that they have not doesn’t mean a conspiracy, it just means a lack of foresight and organisation. But that would mean admitting they have not really put much effort into thinking about their campaign.

If I’d been involved in their campaign, the first thing I would have done when stickers made an appearance would be to get some printed off to do the same. There would have been time. It would not have cost much. But it is so much easier to blame events on conspiracy and do nothing.

Karl Popper had this to say on modern conspiracy theories. He saw them as a “secularization of a religious superstition”:

“The belief in the Homeric gods whose conspiracies explain the history of the Trojan War is gone. The gods are abandoned. But their place is filled by powerful men or groups – sinister pressure groups whose wickedness is responsible for all the evils we suffer from – such as the Learned Elders of Zion, or the monopolists, or the capitalists, or the imperialists.”

He doesn’t believe that conspiracies do not, from time to time, take place, but notes that history teaches us lessons on conspiracies, that most are failures:

“Conspiracies occur, it must be admitted. But the striking fact which, in spite of their occurrence, disproves the conspiracy theory is that few of these conspiracies are ultimately successful. Conspirators rarely consummate their conspiracy.”

“Why is this so? Why do achievements differ so widely from aspirations? Because this is usually the case in social life, conspiracy or no conspiracy. Social life is not only a trial of strength between opposing groups: it is action within a more or less resilient or brittle framework of institutions and traditions, and it creates – apart from any conscious counter-action – many unforeseen reactions in this framework, some of them perhaps even unforeseeable.”


This is important, because the No campaign will inevitably blame any failure of their campaign, and the result, if it is Yes (and it is still not a foregone conclusion) on the Referendum,  upon behind the scenes machinations. We can already see Mr Dun preparing for this eventuality:

"The Yes campaign was planned even before July 15 - it was a tactic of the "establishment party" - and any attempt at fielding an effective "No" campaign had and has enormous hurdles to overcome. "

The fact is that the "No" campaign were slow to get off the ground, so disorganised that no funding was available to either side (and which would have been available had they got their act together), and now seeks to blame their own failings on lack of foresight, lack of organisation and effective planning.

That there would be a referendum was known well before July 15, but the Yes campaign team did not meet until the 1st of September. The enormous hurdle they had to overcome was planning a fairly rapid campaign, which was done both by clear thinking, and by that most overlooked of virtues - hard work. I'm afraid the facts do not support a conspiracy theory.

And there was no Albino monk present at the hustings, threatening candidates with the Royal mace, unless they wore a "Yes" sticker.
Posted by TonyTheProf at 08:20