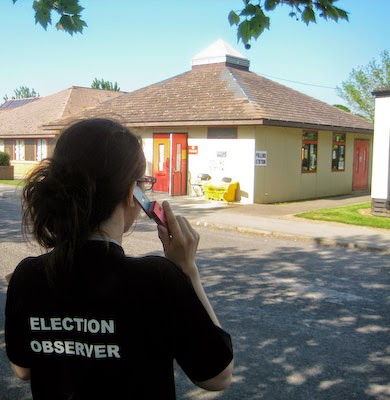 I see that Philip Ozouf has called for international observers.

“International election observers should be present during Jersey elections, according to a winning politician. Senator-elect Philip Ozouf said having observers would give a stamp of approval to the work done by officials. Mr Ozouf was an election observer in the Cayman Islands for the Commonwealth Parliamentary Association in 2013.”

He said: "The thing I am now going to be pressing for is for our law to be changed in Jersey to allow international election observers to be present for the whole of the election and not just the count. Then for the day after the election to make a statement as to whether or not the election has been carried out in a free, fair and accurate way."
But how effective is election monitoring? There is an interesting article by Susan D. Hyde and Judith G. Kelley called “The Limits of Election Monitoring”. They point out that

“On the positive side, observers can verify that governments are indeed playing by the rules, which can be important in quelling ‘sore loser’ protests, increasing voter confidence, assisting the international community in assessing the legitimacy of the elections, and in theory, promoting democratization.”
Now it is clear that some people have unfairly castigated Sarah Ferguson as a “sore loser” for claiming what was a legitimate right. The limits of error have been set at 1%. But perhaps an extra factor should be an absolute difference in votes, as well as a percentage.

The reason for this was stated clearly by Edward B Foley in his article “Recounts: Elections in Overtime”. Looking at the USA, he comments that “it is extremely rare to have a major state-wide election unsettled after Election Night. The mathematical "law" of large numbers accounts for this statistical fact.”

“Think of it this way: Say two candidates run neck-and-neck in a small local election with only 1, 000 voters and they split the vote almost evenly 50.1 percent to 49.9 percent; the outcome is a two-vote margin. However, if two candidates receive the same neck and-neck percentages in a large state-wide race involving 1 million ballots, the result is a 2,000-vote margin, which is not as easily contestable.”
So perhaps the percentages should be revised to also include a threshold for the larger difference in our own Senatorial elections, because as Foley’s example shows, a bare percentage is useful with small numbers of votes, far less so with larger numbers. Alternatively, a smaller percentage could be set for fixed for Senatorial elections to reflect this mathematical deficiency in the Jersey election law.

In fact, mathematician Philip Stark has devised a method in the USA called “risk-limiting auditing”, described in a 2008 paper, “Conservative statistical post-election audits”

“What this new auditing method does is count enough to have high confidence that [a full recount] wouldn't change the answer…You can think of this as an intelligent recount. It stops as soon as it becomes clear that it's pointless to continue. It gives stronger evidence that the outcome is right.”
His methodology has been endorsed by the American Statistical Association as well as numerous academics and he Brennan Center for Justice.

Risk-limiting auditing relies on a published statistical formula, based on an accepted risk limit, and on the margin of victory to determine how many randomly selected ballots should be manually checked. Perhaps it is something the States statistical unit could look into.

Returning to election observers, what also can they do?

“When governments do not play by the rules, observers can reduce fraud that would otherwise occur and condemn governments for election manipulation, sometimes validating domestic protest, as happened in Georgia in 2003 and Ukraine in 2004. “
However, the really important work is also done before and after the elections:

“International monitors conduct a great deal of on-the-ground work months before an election even takes place…They pressure governments -- either through direct meetings or public condemnation -- to update voter registers, support domestic observers, ensure that ballot materials are delivered throughout the country, and adopt technologies that make blatant election fraud harder.”
Of those items listed above, there can be no doubt that the voting registers contain errors in Jersey – duplication of electors where they have moved Parish or District, and the older address has not been removed, mistakes when boundary voters are entered on two lists for Districts within one Parish, and I would not mind betting there are probably dead people on there as well.

The rolling electoral role means incremental changes are made as data comes from electoral register forms about new addresses, but change of address or death is an absence of an entry. Unlike the old days, when a completely new register was created, the rolling register maintains errors for three years.

But the authors also note that observers may be biased because they are not entirely as independent as the word suggests:

“It is important to remember that observers are agents of donors, governments, and organizations, whose need for diplomacy or stability can push monitors away from frankly assessing elections. This problem is underreported and not discussed enough, either because many in the media assume that all monitors are disinterested “election police” or because policymakers choose to turn a blind eye.”
And it also notes that:

“Yet due to poor or delayed funding, many missions arrive too late or are too understaffed to evaluate the full pre-election period and document whether there were problems with the unfair use of government resources, the voter registration process, the way the electoral commission is appointed and run, the rules for candidates and parties, and so on. A similar dynamic holds for after the vote, as observers and donors often shift their focus too quickly to elections elsewhere.”
There is now a moratorium on presenting any propositions after the nomination period, but that still does not prevent a Minister from presenting a promise to bring a proposition.

For instance, Philip Ozouf himself came out with a “New Deal for St Helier” well into his campaign, as his ratings clearly were flagging. Is it right that a Treasury Minister should offer a special deal to a particular group of voters to win them over? Is that not an abuse of office?

If, for example, a Social Security Minister had offered (they didn’t) to bring a proposition for free dental care for over-70s, that would appear to me to also be using their office to their advantage, something which a backbencher or outsider would be unable to do.

It would be an unfair advantage, and one in which the spirit, if not the letter, of the ruling on no propositions after nomination night would be broken. Perhaps in looking at “rules for candidates”, the independent observers would also consider that when preparing a statement as to whether or not the election has been carried out in a free, fair and accurate way!